What's the difference between transportable homes and prefab homes?

In New Zealand, both transportable homes and prefabricated homes are popular options amongst those looking for low-cost, efficient and hassle-free new build housing options. This has been helped, in part, by the ever-rising cost of buying and maintaining an existing home.

Average house prices in New Zealand have risen 4.2% in 2022 with the average sitting at a staggering $850,000. Not only that, but existing older homes may require more ongoing maintenance which can end up costing far more than the initial price. This is leading many people to seek out alternative options for their first home, staff housing, second dwelling investments or downsizing options.

So what about the cost of building a new house? Well, the average cost of building in New Zealand has risen 21% in the past year and with no end in sight for material shortages, it’s expected to continue climbing. Fortunately, by using an innovative and affordable method, it is still possible to build a new house that is warm, comfortable and durable.

Some of the most popular methods are prefabs, kitsets, modular homes, and transportable houses, all of which greatly reduce delays, build times and hidden fees resulting in a high-quality modern house for far less than a conventional build due to their streamlined construction processes.

The term ‘transportable home’ is an umbrella definition for any home that is built in one location before being transported to another location on the back of a flatbed truck. By definition, a transportable home can encompass a wide variety of homes including prefab homes that are factory built and then delivered to a permanent site, relocatable homes that are typically older existing homes that are removed and relocated to a new site, and tiny homes which are designed to be semi-permanent giving them the ability to be uprooted and transported to a new site with ease. These are all popular choices in New Zealand, mainly due to their flexibility, affordability and their typically smaller-scale designs.

As prefabricated homes are built in one location and delivered to another, they are by definition a type of transportable home. Their key differentiation from other styles of transportable homes such as ‘relocatable homes’ or ‘tiny homes’ however is that prefabricated homes are exclusively built in a specialised warehouse or factory, are always newly built homes and are designed to be installed permanently with no intention to be relocated once delivered to the final site. 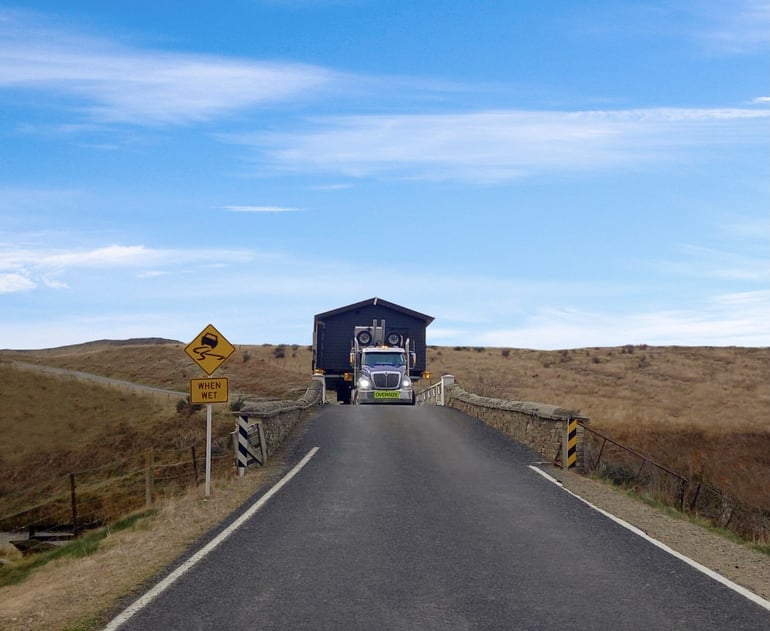 Because of this, they have been developed far beyond the boxy appearance that is typical of other transportable homes. They are constructed in a way that ensures they are safe to transport and can be customised in any design and style of your choosing.

For example, our Benmore prefabricated home is cleverly designed with a U-shaped layout and elegant roof pitch. It’s prefabricated in sections and then transported to the site where the finishing touches and site works make it a fully complete and permanent modern home.

By using approaches like this, prefab houses allow a much larger degree of freedom for style, functionality, and comfortable modern living. Since there's no expectation for them to be hauled away at a later date, designs can be more elaborate and flexible, and if needed, constructed in isolated sections to then be connected on site.

What's the difference between transportable and prefab homes?

As you can see, by definition, all prefab homes come under the umbrella term of ‘transportable’, but not all transportable homes are necessarily prefab. Transportable homes consist of any house that can be moved at some point during its lifespan, whether that be immediately after it is built or after it’s been lived in for a number of years.

What sets prefab homes apart from other types of transportable homes is that they are built in a controlled factory environment and then permanently fixed in the desired location. This process is increasingly popular in New Zealand because it can effectively avoid the hassles of building in our turbulent climate. It is both fast and economical, making it an excellent way to build a high-quality house for less.

Prefabricated, transportable homes are a great way to save costs because they are built indoors, under controlled environments and can be built up to 40% quicker than a conventional home. That’s because the internal fitout can be started before the building is weathertight and there aren’t any unforeseen weather complications. Since many building costs are labour associated, this can seriously reduce the total cost of building.

The travel time for conventional onsite tradespeople can quickly add up, especially when the building site is located away from town centres. But with prefab houses, the travel time is far less and the majority of it is immediately after the house is delivered and already near completion. These overall costs tend to be more predictable and reliable, which helps to keep the build to budget.

With the prefab building process, material shortages are not as much of a problem because excess materials are stored for future builds and ordered in bulk ahead of time. Most prefab homes are designed with similar materials, which makes it easy for companies to stockpile materials in advance and be prepared for sudden setbacks. Because of this, the time spent waiting for supplies is considerably less and the houses can be built within their scheduled time.

Along with the efficiency, predictability and affordability of their prefab building process, Genius Homes prices also include acquiring consent and design re-works. That way you’re protected from further risk and delays to ensure your home is built and delivered as soon as possible.

To discover a design that suits you, check out our range of prefabricated house designs and request a free, no-obligation quote instantly, or download our brochure below.

A sustainable home needs to be energy efficient, produce low emissions and keep waste to a minimum. For many people building a new home, sustainability is...