Thinking of building a home? What are your options?

Building a home is a massive decision. One that is both exciting, and nerve-wracking at the same time! Once you have chatted to a mortgage broker, or bank to see how much you can borrow, it's on to the fun step - finding a design you love.

This will take you to websites like Pinterest, and pretty much every home builder and architect you can Google. But the design is actually only part of the fun, how you choose to have your house built can determine the level of stress and work you will be undertaking over the coming months.

When most people think of building a home they imagine timber frames appearing like the skeleton of a home, and as weeks progress the cladding, roof and windows seal the internals ready for the interior fittings to go ahead. Occasionally you may see a brick home take similar shape with layer upon layer rising from the ground.

These are on-site construction methods and, as the name suggests, are characterised by most of the building work happening in the house's final location.

So what is a kitset home? These are typically delivered as a set of pieces that can be assembled together by the buyer or a builder. They can be quick, as the pieces are pre-cut, and the design is tried and tested. You'll often find these are from plans, as the kit elements need to be able to construct easily, however it is sometimes possible for a unique custom design to be made into a kitset home.

Kitset homes are timber frame, but instead of everything being prepared and cut off-site, then delivered to the site to be put together, these houses may have their frames cut on-site. With a brick home everything is delivered to site, frames are cut and bricks are laid but it's a unique process for each house.

On-site construction has several benefits and drawbacks. There will be a lot of trucks and tradies accessing the site so good access is important, but it can be narrower than required for prefabrication, but more on that later.

If you're worried about the impact lots of vehicles and activity on your site will have, then you will need to consider the number of people involved in a traditional build.

As the name suggests this covers any home where the majority of construction is done away from the final resting location of the house. How it gets there, and its role once it reaches site is then a matter of sub-classification.

This is a more over-arching term than the others. It encompasses any home that is constructed off-site, and then delivered to the final location. A prefab home's construction is typically in a factory, or warehouse under tightly controlled environments, which means a prefab house isn't subjected to weather or adverse conditions. 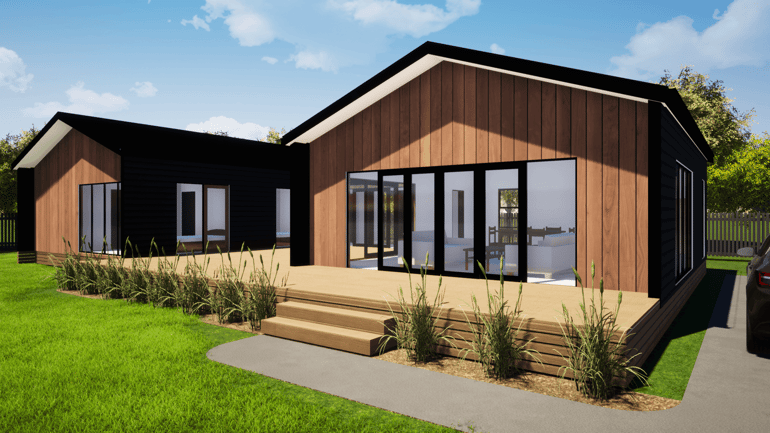 Almost all of the options above are possible build options, whether you choose from a plan and make small tweaks, or ask for the company to design you a unique home. The house above was a custom design originally! Your design is unlikely to limit your build options, but it's important you weigh up how much work and stress you want in a build.

In many cases a prefabricated home is lower cost and quicker than more conventional build methods, but it's always worth talking to specialists in each area to see which route will work best for you.